Tall, dark, and somewhat handsome men wearing gold chains with guns in their hands may not be the dream guys for girls, but they sure are the fashion style inspirations for boys! Luckily for you, the 2002 American crime movie Paid in Full is full of trendy outfits you can recreate. So, without further ado, let’s get started!

Everyone knows the villain has the best style in every crime movie ever. So, it’s only fair that we start our list with Paid in Full’s antagonist. Portrayed by rapper Cam’ron, Rico is a drug dealer in the movie.

Here’s some basic information about Rico: he is cunning, greedy, self-centered, a high-profile drug dealer, and, oh, has an impeccable fashion sense. Take this graphic shirt, for example. Rico wearing a graphic T-shirt with his name airbrushed

This graphic tee with his name airbrushed is one of the most prominent outfits the character donned in the movie – you can tell that the man loves himself more than anything just by looking at this piece of clothing! We all love characters who experiment with different styles. Safe to say, Rico is one of those characters! You can spot him wearing a collared off-white net shirt over a white vest and a gold lion pendant. This vintage 80s-style shirt is trendy but doesn’t compromise his tough drug dealer appearance. We have found a similar front-open collared shirt in a more trendy color for you to style. 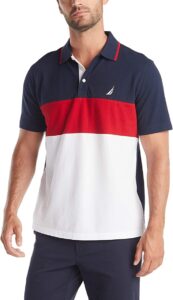 Mitch’s character in Paid in Full was inspired by Harlem’s most prominent drug dealer – Rich Porter. So, costume designer Abram Waterhouse had to pay extra caution to the character’s clothing.

Like Rico, you see Mitch wearing several different styles throughout the movie. In this scene where you see him kicking his uncle out of the house, Mitch is wearing a functional white polo with red and blue stripes.

You can effortlessly pull off this outfit in the 21st century, and we have found the perfect Ralph Lauren polo for that! Style it with knee-length shorts and a gold necklace like Mitch, and you’re good to go!

Ace is Mitch’s best friend in Paid in Full and is a rather flashy drug dealer. One thing you can’t help noticing about Ace is his dress sense. Consider it one of the many pros of working at the dry cleaners before landing a cocaine dealing gig!

In this scene, you can spot Ace wearing a trendy black leather jacket with fur during his phone call with Calvin. He accessorizes the outfit with a beanie, his gold pendant, and a gold wristwatch. You can recreate Ace’s style by styling this leather jacket we spotted on Amazon with a black turtleneck. For a chic style, skip the flashy gold accessories and stick to the beanie.

This summarizes our styling guide for the three prominent drug dealers in Paid in Full. So, which of these Paid in Full outfits are you restyling?